Importance Of Early Marriage In Islam 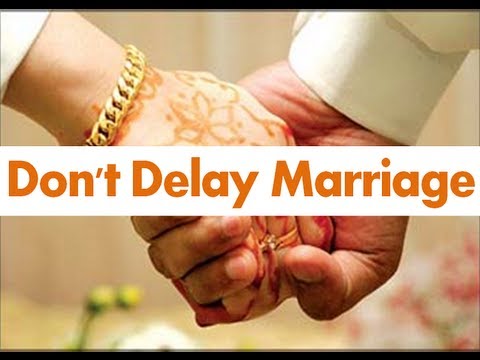 The institution of marriage has immense importance in Islam.
In yet another tradition from Mustadrakul Wasail, it is narrated that:
"When a youngster marries early in his youth, Shaitaan cries out of desperation and says, Alas! This person has protected one-third of his religion, now he will protect the remaining two thirds also."

Imam Sadiq (as) narrates from the Holy Prophet (SAS-Peace be upon him) that he said, "Those believers who marry, protect half of their religion from danger."

As the Holy Prophet (SAW) states: "O youths, whosoever among you can marry, he should do so because marriage protects your eyes (from indulging in sin by looking lustfully at others in privacy."(Makaarimul Akhlaq).

As one matures physically, sexual desires develop in the individual and gradually both girls and boys start getting attracted to each other, which slowly develops into some sort of psychological pressure. This natural and undirected emotion gradually seeks solace in whatever form possible. Unfortunately, more often than not, it results in the youngsters deviating from the right path and indulging in some unwanted and undesired habits. Before becoming victims of ill-directed lust, it is better for them to get married and settle down.

Similarly, when girls attain maturity, then like other women they develop emotions related to sex and there is no cure for it except her husband. If they are not married, prevention of character corruption becomes a remote possibility because after all they are human beings and no human is free from vice.
Therefore, the leaders of Islam have advised their followers to follow this most important Sunnah and the importance of Nikah in Islam.