Wife as a Source of Peace in Muslim Married Life 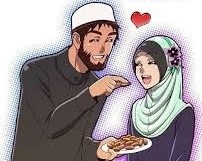 Wife as a Source of Peace in Muslim Married Life

Allah (swt) says in Noble Quran Says
“And among His signs is that He created for you wives from among yourselves, that you may find contentment in them, and He has instilled between you affection and mercy. Verily, in that are indeed signs for people who reflect”. (Quran 30:21)

For a wife to become a source of peace for her Husband and contentment they both need to be in a peaceful Bonding. Therefore the treatment of the husband to the wife plays a great significance in realizing this purpose; the same is implacable on Wife. This will lead to a successful Muslim Marriage.

A husband’s treatment towards his wife should reflect a Muslim’s good character, which in turn is a reflection of the man’s faith. In this regard, the Prophet  said: “The best among you are those who are best to their family and I am the best to my family.”
(Tirmizi, Ibn e Majah)

Kind treatment generates true love for the husband in wife’s heart. The wife, in turn, takes more pleasure in serving her husband and gives all the honor and respect he deserves.

Nikah in Islam for being successful, a good wife is the best treasure a man can possess, after belief in Allah (swt) and following His commands, she is considered as the key to happiness for her husband.
According to a Hadith, the Prophet r said to `Umar t, “Shall I tell you the best a man can treasure? It is a good wife. If he looks at her, she gives him pleasure; if he orders her, she obeys; and if he is away from her, she remains faithful to him". (Abu Dawood)

The Prophet (SAW) also said, “Whoever is granted a good wife, he is helped to practice half his faith, let him obey Allah in the second half”. (Mishkaat)

The potential to become a source of true pleasure is vested in every wife. It is the responsibility of the husband to unlock this potential and utilize it for the benefit of his own life and that of his family.

Like any treasure or wealth which one possesses must be looked after, kept safe and nurtured. This principle shall to a greater extent apply to Muslim women who are been given the highest ranking in Islam and is been regarded as the treasure. Any kind of Abuse or Maltreatment of this treasure will lead to diminishing the good that this treasure delivers and shall become a source of sin and accountability to Allah (swt).